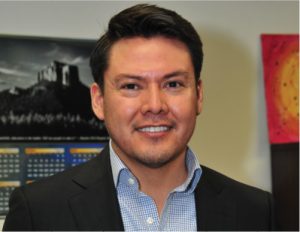 TSAILE, Ariz. ­­— The Diné College Board of Regents held its annual board meeting Wednesday and elected new officers and heard reports from several special college committees.

And, Diné College President Charles Monty Roessel asked faculty and staff to keep up the good work and progress.

“How do we grow every department and every school at this college?” Roessel asked. “Everybody in this room chooses to be at Diné College because it’s the best college out there.”

Roessel stated that there is an estimated $3 billion earned and given back to the Navajo Nation. He said the college’s low tuition rate at $55 per credit hour makes it the lowest and most affordable institution in Arizona and that fact makes Diné College unique.

“We want students to be debt free after they get a bachelor’s degree,” Roessel said. “Part of this is an opportunity to build the Navajo Nation economy.”

Vice President of Finance Bo Lewis informed that the college received a “clean audit” for fiscal 2017-2018, with a single finding in the timeliness of the college’s month end closing. “This finding is being addressed by the accounting staff,” Lewis said.

In Board of Regents action, Greg Bigman was selected by fellow board members to serve a continuous fifth term as board president. Bigman is from the Shiprock, N.M. area and represents the Northern Agency on the board. The selection was done on a nomination by Tommy Lewis. Lewis, who is the superintendent of Diné Schools, nominated Theresa Hatathlie as vice president. Both received unanimous votes from the full panel.

Navajo Nation Council Delegate and Chairman of the Council’s Health, Education and Human Services Committee, Daniel Tso, appointed to the Board of Regents in March, was unable to attend the meeting. The board president position is for one year.