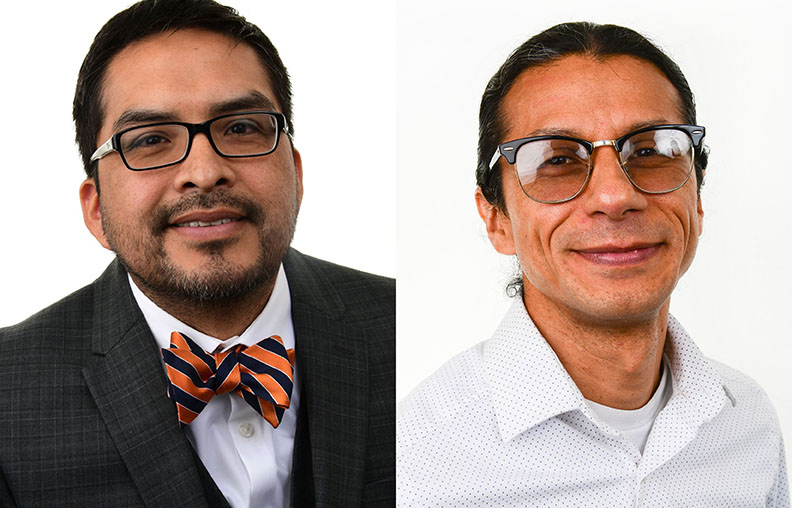 Profs. Manasseh Begay, M.S.W., and Michael Lerma, Ph.D, are working together to shed light on the issue of missing and murdered Indigenous when on Navajo.

Shiprock, N. M. — Scores of Navajo children are taken from their families every year around the Navajo Nation through state and tribal court actions meant to protect youngsters from abuse and neglect.

A lot of those kids end up living, sometimes for long periods of time, with non-Navajo families offering foster care. And that controversial reality, some state social workers believe, is usually the sole option for protecting children. Many Navajo parents and tribal officials worry, however, that the foster care scenario is a systematical denial of family rights that threatens tribal culture.

Diné College social work professor Manasseh Begay is just a little more than a few months into a teaching stint, but before getting into teaching Begay worked as a wildland firefighter and police officer. Begay’s professional background has allowed him to see first-hand the realities of abuse and neglect.

“I was raised on the Fort Apache Indian Reservation and I am enrolled in the White Mountain Apache Tribe,” Begay said. “I lived on the Navajo Nation in Tuba City. I have also worked in the counseling field, working with people involved in addictions and other mental health diagnoses.”

Originally from Cibeque, Ariz., Begay (also) worked for the U.S. Forest Service, the Bureau of Indian Affairs and the Bureau of Land Management. The half-Apache and half-Navajo Begay also worked as a deputy for the San Juan County (N.M.) Sheriff’s Office — the county seat of which is Aztec.

Begay is also concentrating his efforts on other administrative duties, too, such as spearheading the academic program review for the college’s social work program and starting up partnerships with area law enforcement as it pertains to missing and murdered Indigenous women.

The APR stands to become accredited by the Council on Social Work Education (CSWE) soon. Represented in an APR report, which Begay oversees, is the desire to make Diné College’s social work program a four-year degree program. And, when missing Indigenous women go missing or murdered, or when Indigenous female murder victims are unidentified, forensic evidence has not been adequately gathered by law enforcement agencies. Cases grow “cold,” or crucial evidence is lost, or never get forwarded on from law enforcement to the appropriate agencies.

“I feel through educating people on the roles of a social worker will help increase the number of Native American social workers,” Begay said. “I feel a large reason for a need in this field is a misunderstanding of what a social worker is.”

Begay continued, “I have been able to help several people through their struggles in my role as a social worker.”

Looking back, it was the jobs as a federal firefighter and a San Juan County deputy that compelled Begay to go into social work.

Begay lived in Boston, Mass., for eight years just before moving to Santa Fe to attend the College of Santa Fe. He graduated from the University of New Mexico with a bachelor’s degree in liberal arts and possesses a master’s degree in social work from New Mexico Highlands University.

Begay works for the School of Business and Social Science under Michael Lerma, Ph.D. Lerma is the Dean of SBSS and said, “Begay has the ideal background and experience to teach social work.” Lerma added, “We are very pleased to have (Manasseh Begay) at the college. His understanding of the Indian Child Welfare Act (ICWA) will advance the Navajo Nation in reclaiming our children from non-Dine institutions.”

ICWA was put into law because of the disproportionately high rate of forced removal of Indian children form their traditional homes and essentially from American cultures as a whole. Lerma elaborated: “In the Diné way, we see our children as beings to be nurtured into adulthood and toward the attainment of knowledge, wisdom and age. It is the responsibility of our elders to carry out this task of guiding the youth toward becoming elders. Diné College is building toward the movement to put a stop to unhealthy choices and lifestyles for the betterment of Diné citizens.”

According to the Indian Health Service, American Indians have higher death rates from causes such as alcoholism, tuberculosis, diabetes, accidents, suicide and homicide than other Americans. Their life expectancy is six years lower that the U.S. average. Unfortunately, according to IHS data, there is an unmet need for more American Indians to enter health or social care professions.

And, according to the CSWE, only 1 percent of all social work graduates are American Indians.

“It’s a gap and a gap that, unfortunately, has been in existence for a long time,” Lerma said.