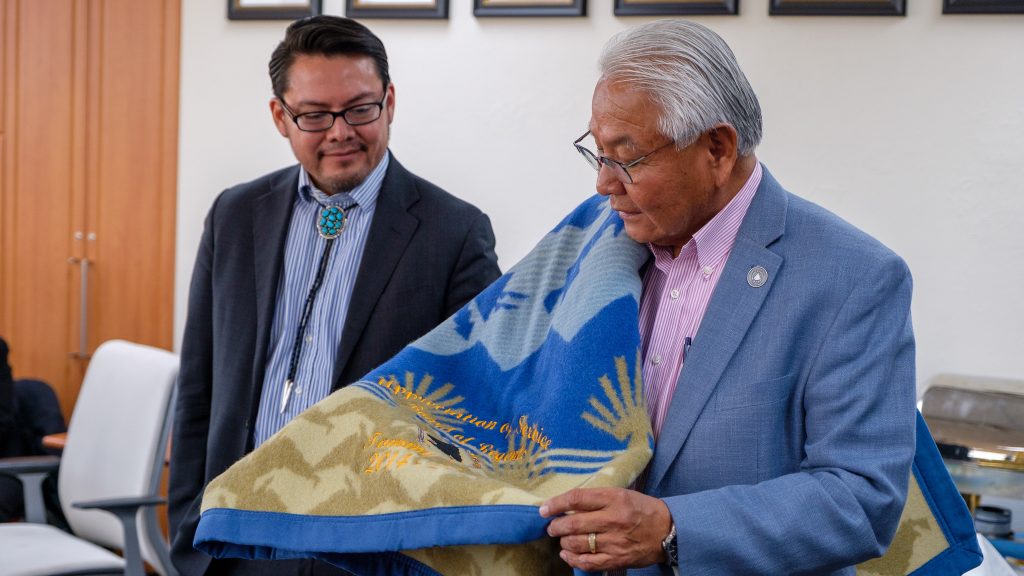 Photo Caption: Dr. Tommy Lewis (r) resigned from the Diné College Board of Regents. Lewis was a former president of Diné College and oversaw the college’s name change back in 1997.

TSAILE, Ariz. – Tommy Lewis, Ed.D., the outgoing member of the Diné College Board of Regents (BOR), said he’ll miss the college, saying Diné College “…is on the right path with the right leadership.”

Lewis, the superintendent of the Diné Department of Education (DODE) and a former president of the college from 1993 to 2000, stepped down from the BOR after its most recent meeting on Nov. 12. The resignation went into effect Nov. 18.

“I will miss coming to the meetings and being here with you,” Lewis said at the meeting. The BOR presented Lewis with a Pendleton blanket and an appreciation lunch. “It was a tremendous responsibility. I’ve tried to help out the best way I could.”

The affable Lewis presided over Diné College’s name change from Navajo Community College in 1997, which was prompted by the college’s offering of baccalaureate degrees. There are currently 10 bachelor’s degree programs at Diné College. The college was founded in 1968 as the first-ever tribal institution of higher learning in the U.S.

Lewis’ resignation coincides with his acceptance of a job as the superintendent of schools in Coconino County in Flagstaff. He started that job this week with an elected term running through Dec. 31, 2020. He has said that he’d contemplated retirement from DODE and resignation from the BOR to be closer to family in Flagstaff.

Lewis has over 40 years of education experience and has held senior level positions working with schools, colleges and universities at the local, state and national levels. He has been a teacher, principal, superintendent and college president.

The Dilkon, Ariz., native speaks fluent Navajo and graduated with a doctoral degree in education from Northern Arizona University. Lewis was around when former president of the U.S. Bill Clinton visited Diné College in 2000 – believed to be Clinton’s first ever to a tribally-controlled institution.

Greg Bigman, president of the Diné College BOR, said Lewis was instrumental over the years in helping bills get through the Arizona and New Mexico state legislature. He said Lewis’ leadership would definitely be missed.

“He got bills through the legislature. He oversaw operations of the college and its revenue during his tenure,” he said.