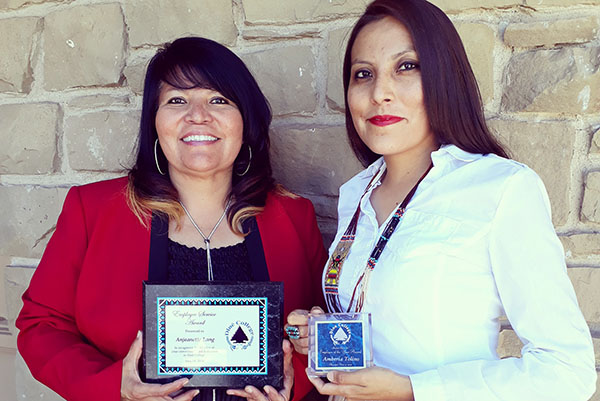 SHIPROCK, N.M. — Diné College strives to be a workplace where employees feel valued and recognized for all the hard work they do. That’s why the college hosts an annual awards program that publicly recognizes the contributions of faculty and staff.

Mark Bauer, Christine Ami, Jeannie Lewis and Matthew Skeets received the school’s Faculty of the Year Award recently at a special ceremony that took place at the Shiprock campus. Each possesses an advanced degree.

The employee ceremony honors excellence and service from the entire college spectrum. Both staff and faculty receive recognition for their years of service to the college.

“The people we are recognizing today exemplify our mission,” Diné College President Charles Monty Roessel said during the hours-long event. “You are with students from the time they enter until they graduate.”

Years of Service awards were given to 32 people. Administrative Assistant Irene Alva and Cataloging Librarian Rosita Klee have each worked at Diné College for 45 years — and are the longest workers currently still-employed at the college. “It’s a very nice and special honor,” Alva said.

Ruth Nez, Ed McCombs, King Mike, Gloria Edison and Leonard Yazzie have at least 30 years of service between them. It was McCombs’ second consecutive year of receiving an award.

“I was pretty surprised at being honored this year,” Mark Bauer said. A public health instructor, Bauer started working at Diné College in 1980. “It was interesting to hear of various staff and faculty being honored, and hearing about what they had been doing and why they were being honored.”

The Employee of the Year award was given to Dr. Paul Willeto, Stephanie Jim, Kim Jim and Kevin Mitchell.

“I came here in 2009 and my thoughts were I’ll be here for 2 years,” Anjeanette Lang said. “Ten years later, here I am. Diné College has given me the opportunity to gain valuable skills, knowledge and experience. I have met so many people through the various departments where I have worked. Being a part of the Office of the President and the Board of Regents was most special. The Department of Human Resources taught me that time is of the essence. Thank you to the Diné College students and colleagues for a productive experience.”