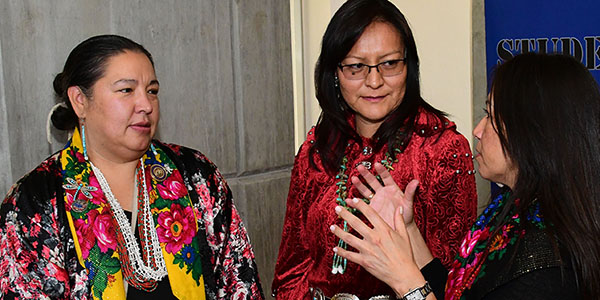 The forum was held at Diné College’s Shiprock campus.

The memories of their loss brought up challenges and obstacles that many families face as they seek answers and strive for justice. The stories from family members and law enforcement officials highlighted tragic and painful instances that entire communities face when dealing with missing and murdered men, women and children.

Earlier this year, Diné College made a commitment to partner with other educational institutions to initiate a movement to protect and recover Diné relatives across the Navajo Nation. In May, the Navajo Nation Office of the President and Vice President announced the Missing and Murdered Diné Relatives Forum, and in June it was declared by Diné College’s Office of the President that the college would host the forum at its Shiprock South Campus.

Traditional knowledge holders and medicine people were invited to provide protection and guidance, and they rallied support for this important cause. Speakers such as Rita Gilmore of Chinle, Ariz., utilized songs to guide the conversation toward healing. And, coalition members from the Coalition to Stop Violence Against Native Women (New Mexico), the Southwest Indigenous Women’s Coalition (Arizona), and Restoring Ancestral Winds (Utah) discussed the various ways to target problem areas across the Navajo Nation relating to crime and social issues.

Diné Colleges’ School of Business and Social Science presented a powerful discussion on racist laws that disempower the Navajo Nation from protecting its citizens. A panel discussion on eliminating the Major Crimes Act was moderated by social work faculty member Manasseh Begay and rounded out by the newly hired Diné College economics faculty Milton Bluehouse, Jr. The panel also featured world-renowned scholars Chief Justice Robert Yazzie and the University of Arizona’s Robert A. Williams Jr. They all stressed the need to take care of missing relatives on terms aligned with Diné culture.

It is the mission of the Navajo Nation to develop a digital database that can be analyzed and used as a tool to track criminal and social statistics related to this issue. The Missing and Murdered Diné Relatives Data Institute will provide a hub for various entities to converge, work together, share data, streamline communication and create a comprehensive plan to stop the widespread attacks on the Navajo people.

Diné College’s Dean of Business and Social Science Michael Lerma stated, “We cannot wait for state and federal agencies to solve this issue for us. We need to do it ourselves. The responsibility is on our shoulders. For those of us who have the resources and the capability to do more, we need to step up and do this for our relatives. K’ad7, T’aa nihí hasht’e da diilniił!”

The U.S. Senate held a committee meeting with leaders from Indian Country in December to find solutions to the missing and murdered problem. Crotty is a member of the task force. She says there is a lot of distance among tribal, state and federal authorities when sharing information and that needs to be addressed. She told the dozens of audience members present that it should not be assumed that missing people leave on their own.

“I’m not a lawyer. I’m not a judge. But it’s happening,” Crotty said of the situation. “The Navajo Nation, like other indigenous nations in the U.S., has grappled with the issue of data collection and analysis,” Crotty continued. “As any expert will tell you, data is integral to how we view and understand social problems, strategize and create long-term solutions.”

Begay, 26, was from Oak Springs, Ariz., on the Navajo Nation Indian Reservation. She was last seen leaving her mom Jacqueline’s house and the case has since become an example of the hurdles that indigenous families of missing loved ones face. Cisco, and others, believe Begay was murdered. The problem is widespread throughout Indian Country.

“Communities are carrying the burden of finding the deceased,” Lucchesi said, “But communities don’t have the support to deal with that additional trauma.”

Lucchesi maintains one of the largest databases of missing and murdered indigenous women in Canada and the U.S. The data is made available to tribal advocates, activists, policy makers, service providers and community leaders.

Lerma noted that the Missing and Murdered Diné Relatives Data Institute would focus on the role of state and federal agencies, law enforcement, male and female perceptions around the Navajo Nation and demographic data collection. He said the organizational structure of such an institute is already in place.