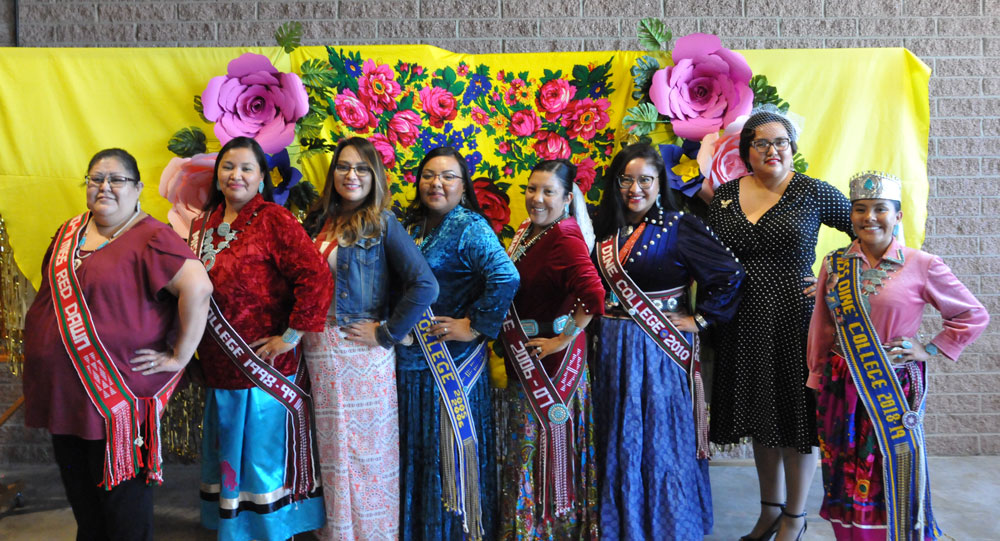 Stacey Jones, who served as Miss Red Dawn from 1990 to 1991, said there have been big changes across campus. “There are some different buildings and I know that Diné College is now a four-year institution,” Jones said. Jones is a human resources representative in Phoenix. “The coffee shop (Warrior Coffee) is nice.”

Originally from Wheatfields, Ariz., Jones majored in education while a student at Diné College and went on to graduate from Fort Lewis College in Durango, Colo., with a degree in elementary education.

Quintanya Claw-Jensen of Many Farms, Ariz., one of the eight titleholders that attended a meet-and-greet session, held her title from 2005 to 2006. She studied Diné Studies and Navajo Language and went on to receive a master’s degree in elementary education from Arizona State University. An accomplished flautist and graphic artist, Claw-Jensen is now a teacher at Window Rock High School.

“This brings back a lot of memories,” Claw-Jensen said. “I recognize some of the staff that are still working here. There is some new stuff happening at the college, new programs and majors. The college has flourished. I really like the new coffee shop.”

Among the requirements to be crowned Miss Diné College are full or part-time student enrollment status, a grade point average of at least a 2.5 and an understanding of Navajo culture, history and traditional values. The one-year reign comes with a $1,500 academic scholarship.

A panel of judges crowned Mercede Johnson of Tsaile as the new 2019 Miss Diné College.  Johnson, who is pursuing a bachelor’s of science degree in public health, excited the crowd when she sang a traditional Navajo Mountain Song for her traditional talent segment, while her contemporary talent foray was a demonstration on “How to do CPR.” The other two contestants were Shaynee Bileen (A.S. of Applied Science – Health Occupations major), and Shastikka Iyua (A.S. Health Occupations major).

“The pageant is important not because of the title it carries, but the embodiment of the values of our college and community,” Dine College Board of Regents President Greg Bigman said. “Values play a key role in the cultivation of people and organizations. Having values reflective of our college is important for our students and growth.”

“The Miss Diné College Advisory Committee promotes student success through acknowledging our students’ talents and abilities,” Stephanie Jim, committee member and first year student coordinator at the college. “The pageant serves our students in showcasing their platforms, talents and culture.”