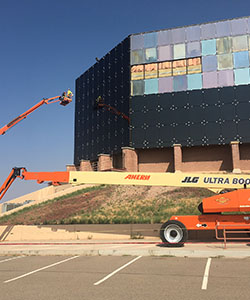 TSAILE, Ariz. — Students and faculty members returning to Diné College for the beginning of the Fall 2018 semester will see some changes and improvements that have occurred over the summer, school officials say. Some of the changes are ongoing, while others are in place.

“We are promoting this program now. A lot of schools require their teachers to have certifications in language and culture,” George Joe, marketing and communications director at Diné College, said.

Note: Built in 1974, the NHC is the tallest building on the Navajo Nation and considered one of the busiest places for staffers, students and the general public visiting the Tsaile campus.