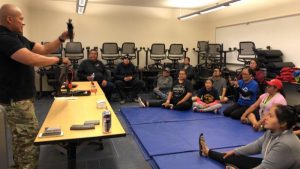 The committee drilled on skills and tactics needed to respond to the threat of an active shooter. Adrian Lewis, Security Supervisor at Diné College, said the College isn’t wishing for a bad event to happen, but emphasized preparation should an active shooting situation ever occur.

The trainings took place at the Chinle Center of Diné College.

“In light of the repeated community threats of active shooters among schools and the public, CSER made it an effort to provide training to students, staff, faculty and the community on how to respond to an active shooter and go about safety procedures to survive such an event,” Lewis explained. (Lewis is active military, a former Navajo Nation police officer and a certified instructor with the federal Department of Homeland Security’s Law Enforcement Training Center).

“As a higher education institution, Diné College is mandated by federal requirements (Clery Act of 1990) to provide campus safety training and awareness to increase safety protocols and procedures,” Lewis said.

The Background
The Diné College active shooter training sessions have taken place in March, April and June of this year and at the Tsaile, Shiprock and Chinle campuses. The trainings aren’t geared just toward responding to a school situation: They’re about how to respond to an active shooter threat in any type of building, Lewis said.

Commenting on the Chinle trainings, Lewis said they were spot on. Seventeen participants went through exercises on:

The Practicality of the Trainings

In illustrating a mock circumstance, participants were taken to Chinle’s Basha’s parking lot to learn about safe environment, potential threats and how to increase security and safety. In other mock circumstances, participants went through active shooter scenarios such as hostage taking in a classroom and physical fighting, weapon disarming and taking down a gunman.

There hasn’t been an actual active shooter scare at the College, but a false call regarding a bomb threat was reported to the Shiprock Branch Library in Spring 2017.

Well-Worth It
“The program was a pretty intense 16-hour training on how to disarm a gunman,” Gwendolyn Dedman, Officer Coordinator at the Chinle Center, said.

“This program boosted my confidence on knowing how to react to an active shooter. It was new to me on how to give first aid, address a shot victim — and running and carrying a wounded person was something new to me. It was intense, but I learned a lot on how I can help those people in need and what to do if we ever have to come face to face with an active shooter.”