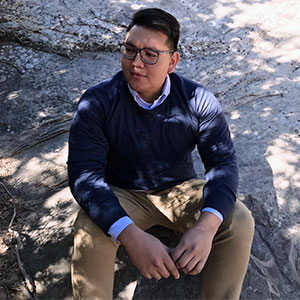 TSAILE, Ariz. –Haesong Kwon, Ph.D., a member of Dine College’s English faculty, recently published The People’s Field. With the focus on the Japanese occupation, the Korean Conflict and its aftermath, The People’s Field (Southeast Missouri State University Press) reflects on the sounds, ideas, and histories of the Korean peninsula. Kwon was born in South Korea.

Kwon also won a poetry prize for the manuscript. The People’s Field, was selected as the winner of the 2018 Cowles Poetry Prize. Kwon’s manuscript contains a paradoxical experience of movement and stillness, history and the eternal present, a judge wrote of Kwon’s work.

Skeets’ debut poetry collection, Eyes Bottle Dark with a Mouthful of Flowers, won the 2018 National Poetry Series and was published by Milkweed in the Fall of 2019.

Works by Skeets’ work have appeared in Boston Review, Waxwing and elsewhere. He is the winner of the 2018 Discovery/Boston Review Poetry Prize.

Ploughshares in an American literary journal established in 1971 at Emerson College in Boston.