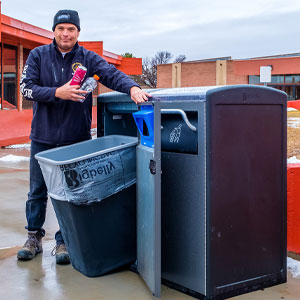 TSAILE, Ariz — You finish that last sip of morning coffee and stare at the empty paper cup. Should it go into the recycling bin or the trash compactor? That’s what officials at Diné College want people to ponder before they throw something away.

The college recently debuted solar-powered recycling bins and trash compactors, which collect everything from aluminum cans, plastic bottles and rubbish. The bins are manufactured by Massachusettes-based Big Belly Solar and are placed at each of the college’s six campuses — the first solar-powered bins on the Navajo Nation.

Diné College’s Green Club oversees the recycling efforts. The bins sit directly next to each other, unless it’s an instance where there is only one bin.

“I am totally concerned about the environment and have been teaching environmental science for decades and working with various environmental groups,” Margaret Mayer, a science instructor and the recycling faculty mentor who started the Green Club some 15 years ago, said. “We want to reduce the trash and we want to use less energy in having it recycled than having to make plastic bottles and aluminum cans from raw materials.”

Although Green Club membership has dropped over the years, the group manages to do periodic Tsaile campus cleanups, which in the past has included the Tsaile lake.

Anyone — student, faculty or administrator — can participate in the recycling initiatives. That means when someone has something to throw away or discard, officials ask that you look for the grey and blue bins and not the normal trash cans around campus. The bins are graphically marked as to let people know what is trash and recyclable.

Wayne O’Daniel, building maintenance supervisor at the Tsaile campus, said the bins don’t pose a nuisance, “…in fact they are modern and aesthetically pleasing — even when full,” O’Daniel said. He said not enough people at each of Diné College’s campuses know about the Big Belly Solar bins. He said convincing people to recycle can be challenging. There are some people who just don’t understand waste problems and recycling strategies, O’Daniel said.

“Right now, the fact that we have the bins is still growing on people,” O’Daniel said. “This is really the next step in the great global environmental cleanup, and a Green solution for the Diné College community.”

The bins have a capacity of 567 liters and electronically alert O’Daniel once they reach a certain capacity. The workers who report to O’Daniel empty the bins regularly and assist with refuse transport to recycle sites and landfills.

The bins come with a self-powered solar attachment. The compaction mechanism is chain-driven and no hydraulic fluids are used. As far as maintenance goes, the doors of the bins must be manually lubricated every now and then.

Candice Fritz, an environmental science major at Diné College who is from Tsaile, is the president of the Green Club. She said word about the bins is getting around.

“We make sure the bins are emptied and make sure students and everybody else knows about them,” she said. “This is something very positive for the environment.”