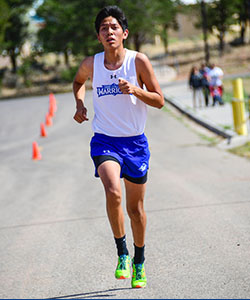 Warriors Run Away from NTU Skyhawks

TSAILE, Ariz. — The Diné College Warriors proved that they are a team to be reckoned with, placing three men’s runners in the Top 5 and two women in the Top 3 at the Diné College Cross Country meet on Aug. 25.

The meet was the first of the season for the Warriors and their sole competition at the meet was rival Navajo Technical University (NTU). And in an interesting twist, the athletic director at NTU and NTU’s head cross country coach both once worked at Diné College. George LaFrance was formerly the athletic director at Diné College and Leonard Lee the school’s cross country coach.

“The Diné College cross country team is off to a great start,” Diné College Athletic Director and Interim Head Coach Shawn Frank said. “There is a lot of potential in these young Diné men and women. Over the course of the next 11 weeks, I will be working with these student athletes to enhance their strengths individually and as a team, while focusing on their education,” Frank said.

Alwyn Reid finished with a winning time of 32.35 to top the men’s field.

“I was trying to watch the girl in front of me and I knew I had to win for my team,” Jackson, a freshman, said. “I’m happy with the race that I ran.”

“I was happy to see our cross country men’s and women’s teams compete,” LaFrance said. “This will be a very long season and it is a start that we can work on to build on.”