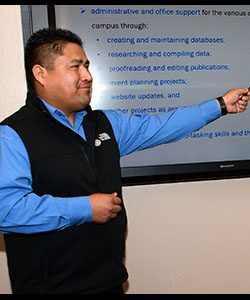 Tsaile, Ariz. — The presentations and lectures given to high school students by Diné College staffers at the recent Summer Bridge Program (SBP) weren’t just for fun. They were designed to assist participants in getting to know the realities of college life.

Summer can seem like an endless break for some kids. But the SBP requires high school juniors and seniors to participate in classroom-like sessions that others might take for granted.

The program, to some degree, represented the introduction to the hardline as it relates to daily college life.

“I like school, but I really wasn’t thinking about college after high school,” Micah Ellison, 17, a senior at Red Mesa High School near Teec Nos Pos, Ariz., said. Ellison was one of 24 area students from around the Navajo Nation who took part in the second session of Diné College’s Summer Bridge Program. “I fell in love with the campus. I wish I could have stayed another week.”

The second session of the 2018 SBP — which is free of charge — went from July 16 through July 20 at Diné College’s main campus in Tsaile. A previous program started June 18 and ended June 20. There were 11 participants in the first session.

The participants, who resided in residential halls at Tsaile during the program, were introduced to the application process, financial aid, student learning centers, athletics, residence hall life, how to select a major and good and bad study habits.

Reeverson Descheny, an Arizona State University grad and the Director of Career Advancement at Diné College who oversees the revived SBP, called the two sessions “beyond successful.”

He said everything done during the sessions allowed students to get a “feel” for college. He said SBP isn’t really something new at the College, saying the program existed back in 2008.

“This is successful beyond what we initially expected,” Descheny said. “We’ve heard nothing but good things from the students who were a part of it.”

Ellison said Jeremiah Holiday informed on what options are out there for students getting ready to graduate from high school. Holiday is a Fort Lewis College graduate and a U.S. Army veteran. Ellison said the bridge program helped him to not be afraid of college, saying, “I was scared of college. I don’t want to go to college and then get a job that I don’t like doing.”

Likewise, Angellece Bryant, a senior at Navajo Pine High School in Navajo, N.M., said she’s closer to selecting a college or university based on the outcome of SBP.

Ellison said he’s leaning toward majoring in “something science” once he does get to college. He said he’s contemplating a bunch of colleges and universities to attend after Red Mesa High, but Diné College sits at No. 1 for now.