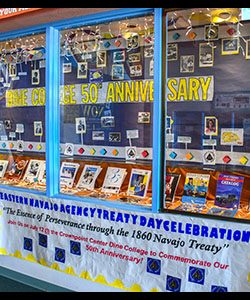 CROWNPOINT, N.M. — With thoughts on the past and eyes on the future, more than 100 attendees came together Thursday at Diné College’s Crownpoint Center over a commemorative luncheon.

The event was entitled “Crownpoint Info Day,” and brought together administrators, students and community members. The College is in the midst of celebrating its 50th anniversary and like events have been held in Tsaile and Window Rock.

“This is not only about education,” Navajo Nation President Russell Begaye said. “But this is also about building the Navajo Nation.”

Those present participated in a Fun Walk and listened to short speeches by area dignataries. They reminisced about the College’s meaning to the Navajo Nation. The guest speakers acknowledged Navajo Technical University, which also has a campus in Crownpoint and is located directly next to Diné College. NTU was established in 1979.

“They two are both very good schools,” Tsosie said. “Diné College and Navajo technical University are as good as they come with respect to Navajo education.”

Diné College was established in 1968 in Many Farms, Ariz., as the first tribally-controlled higher education institution in the U.S. As part of the 50th anniversary activities, a gala and a Speaker series are in place.

Said Johanna Silago, the center director at the Crownpoint Center: “This was very interesting and everyone got the chance to meet new people and learn new things.”