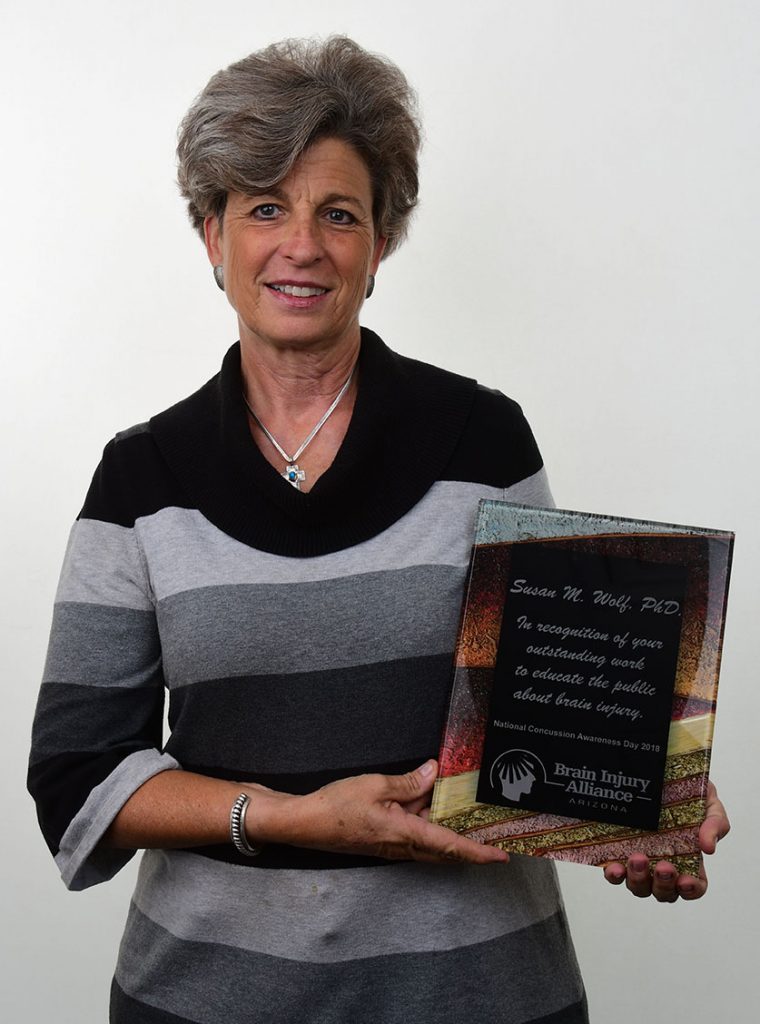 TSAILE, Ariz. — Susan Wolf, Ph.D., a psychology faculty member at Diné College, was recently recognized for an ongoing commitment to advocacy and education via the first National Concussion Awareness Day.

The recognition took place Sept. 21 in Phoenix. The award was given on behalf of the Brain Injury Alliance of Arizona and that organization’s Board of Directors.

“I am very honored to have received the award,” Wolf said.

Wolf, who is originally from Wisconsin, was honored for her continued efforts during the daylong conference. The early part of the conference featured a “State of the State” address, updating professionals about the current state of guidelines regarding concussions, as well as legislative initiatives. The conference featured physicians and therapists from several medical concussion centers around Arizona, including Barrow Neurological Institute, Banner Good Samaritan Medical Center, the A.T. Still University and the University of Arizona Medical Center.

Professionals got an opportunity to gain continuing education credits as Wolf presented and facilitated a three-hour seminar consisting of more than 70 participants, addressing the issues of identification and screening and management of concussions in both the pediatric and adult populations.

The workshop was followed by a panel discussion which included three young survivors of traumatic brain injuries — two of whom experienced sport-related concussions, one in basketball and the other in volleyball.

Wolf, whose doctoral degree is in education psychology from Arizona State University, continues to offer communities across the Southwest opportunities for professional development through her company, Empowerment Research, which contracts with several tribes, with state departments of education and health services along with the Arizona Governor’s Council on Spinal and Head Injuries.

Wolf received a four-year grant from the Arizona Department of Education to offer professional development across the state. She will be providing a five-part continuing education series on Traumatic Brain Injuries at Diné College on Saturdays over the upcoming months and in cooperation with Diné College’s School of Diné Studies and Education, as well as local community schools and public school districts.