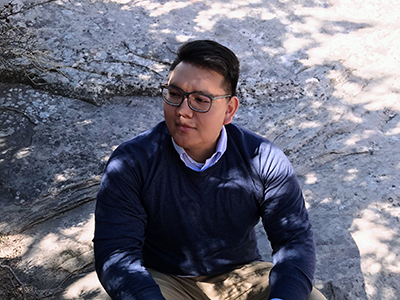 Matthew Skeets and Haesong Kwon, both English instructors at Diné College, received honors from the National Poetry Series and the Cowles Poetry Prize, which is associated with Southwest Missouri State University.

“I was actually at work at the Window Rock Center when I got the phone call from the (NPS) that I won the prize,” Skeets said of his winning book of poetry. “I was speechless. I assumed they made a mistake,” Skeets said of being chosen. Skeets also won the Discovery/Boston Review Poetry Prize in May of this year. He started working at Diné College as a professional writing tutor and now works as an English instructor.

Haesong Kwon, Ph.D, an English faculty member, also won a poetry prize this year. Kwon’s manuscript, The People’s Field, was selected as the winner of the 2018 Cowles Poetry Prize.

Kwon’s book will be published in the fall of 2019. With the focus as the Korean War and its aftermath, The People’s Field reflects on the sounds, ideas and histories of the Korean peninsula. Kwon is of Korean descent.

Kwon’s manuscript contains a paradoxical experience of movement and stillness, history and the eternal present, a judge wrote of Kwon’s work. “These poems, short and spare, carry the intensity of distillation but resist the epigrammatic as they show us a rich and complex landscape that asks for and earns reading after reading,” the judge wrote.

Kwon holds a doctorate from Oklahoma State University and Skeets is a graduate of the University of New Mexico.

Other Diné College winners over the years who have won poetry recognitions include Orlando White, Irvin Morris and Anna Lee Walters.

The Cowles Poetry Book Prize takes place annually. The NPS is open to established U.S. poets. The NPS selects five manuscripts as winners. Each winner receives a $10,000 cash prize in addition to the publication of the manuscript at five presses.

Skeets is the first Native American poet to win the prize. His book of Poetry will also be published in the fall 2019.