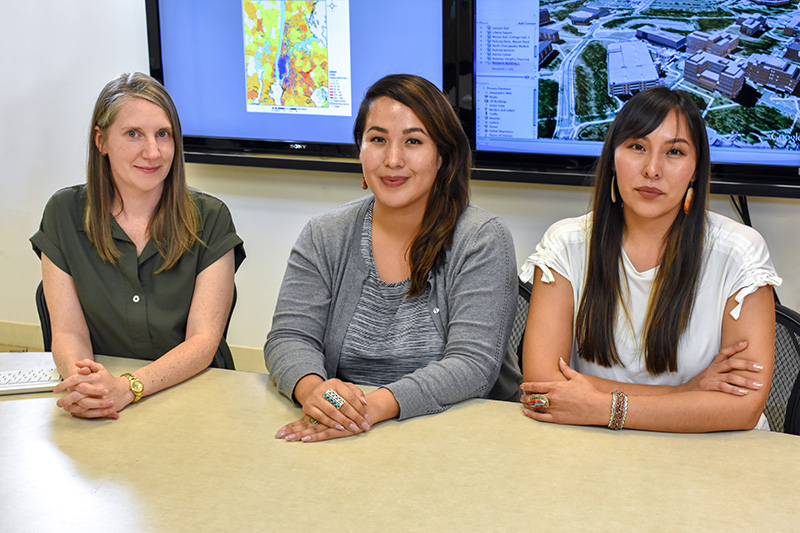 Student-Teacher Trio Back from DHS-funded Program

TSAILE, Ariz. — The Diné College contingent that recently spent several weeks researching school shootings and violence at George Mason University in Fairfax, Va., is back in class and readying for another research go-round — but this time not so far away.

Sara Kien, Ph.D., Tatyanna Begay and Ashley Lee participated in a 10-week Department of Homeland Security-funded program that aimed at improving prevention efforts connected to school shootings and other forms of mass violence. Begay and Lee are pursuing baccalaureate degrees in psychology.

“The trip was very challenging, very rewarding and we all benefitted from the experience,” Kien said. Kien holds a doctorate degree in cognitive psychology from Northwestern University in Evanston, Ill., and was named faculty member of the year in May. “We conducted research in collaboration with the (DHS) Center of Criminal Investigations and Network Analysis. We analyzed social media during the immediate aftermath of a school shooting or mass shooting and we conducted an online experiment in which we examined the casual influence of media in social contagion of extreme violence.”

Why do the Research?

Kien explained that the purpose of the research was to investigate the role of media and cyber communication in mass killings and school shootings as part of an effort to develop more effective prevention strategies.

Kien said as part of the group’s research activities, a tour of the Crime Scene House at GMU was key and informative. The CSH facility is used as a tool to teach students how to process forensic evidence at crime scenes. The Diné College group was also able to serve as participants in active shooting training exercises involving various law enforcement units, including scent dog units, Kien said.

“The (George Mason) police training exercises simulated school shooting scenarios and provided different police teams with the opportunity to engage in valuable training in preparation to respond to a school shooting incident,” Lee commented. Added Begay, “My research was with analyzing the qualitative data of Twitter to better understand the contagion in social media, by categorizing psychological casual attributions, evaluating emotions and closely examining the direction of focus on victims,” Begay said.

Kien said the three are now working on three articles, which they plan to submit to Psychological Science, the American Journal of Public Health and the Journal of Gender and Violence. She said a proposal for $50,000 in follow-up funding is in the works as is a $1.5 million grant application, so that the research can be continued at Diné College. Kien said she expects to begin the follow up research come January 2019.

The research trip to GMU was the first time in the College’s 50-year history that Diné College was chosen to participate in such a project. Diné College periodically holds active shooter trainings and sexual awareness conferences for staff and students.