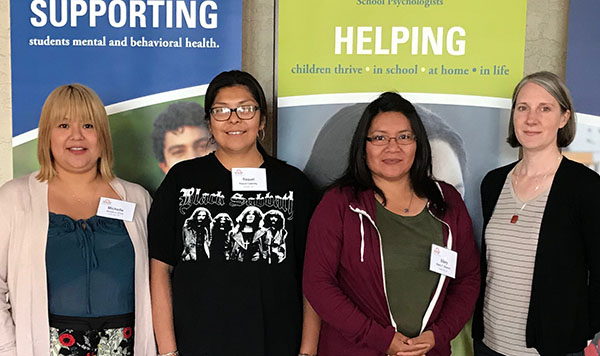 Diné College Students Michelle Brock, Raquel Calamity and Ellery Honanie are part of a research project that’s looking into the causes of mass school shootings. The three are studying psychology and conduct the research under the guidance of Prof. Sara K​ien.

TUBA CITY, Ariz. — As the number of mass shootings and acts of violence at schools increase around the country, student researchers at Diné College have set out to determine the specific underlying causes.

In explaining what the research entails, Sara Kien, Ph.D, the Diné College psychology professor overseeing the project, said in spite of growing evidence to support the possibility of a contagion effect for mass killings and suicide, there hasn’t been a lot of research that investigates mechanisms that zero-in on how the contagion occurs.

“The purpose of the project is to better understand the role of media in contagion with the spread of mass shootings and school shooting violence,” Kien said. “We have three psychology (B.A.) students at the Tuba City campus who are working as research assistants over the summer in collaboration with the federal Department of Homeland Security-funded Center for Criminal Investigations and Network Analysis.”

Kien said throughout the summer, Brock, Calamity and Honanie will make themselves familiar with previous research on the topic, code and analyze social media that follows highly publicized shootings, receive threat assessment training and analyze public discourse of school shooters.

She said a primary goal is to investigate the processes by which mass school shootings are becoming “normalized” across the U.S. The events of interest include the 2017 Las Vegas and the 2018 Parkland (Fla.) shootings.

Michelle Brock is a Central High School (Phoenix, Ariz.) graduate and a senior psychology major at Diné College. She said she’s never been involved in such a psychology-based research project, saying, “…we will attend a conference on threat assessment, where the objective is to understand how school psychologists are trained to respond in (crisis) situations.”

Ellery Honanie, who attended Greyhills Academy in Tuba City, said she has collected, coded and analyzed data with respect to the project.

In terms of how the outcome of the research would be beneficial around the Navajo Nation, Honanie said, “This research could make a difference by helping others become aware of the social media pattern if there is ever a shooting. It could also help officials plan trainings in schools or hospitals to prevent such shootings.”

Raquel Calamity is a graduate of Tuba City High School. She said so far she’s busied herself with pulling out key words that are related to codes. She said the research methods and statistics psychology classes taught by Kien have been a tremendous help with the project. She said the research is giving her the background to make a difference around the Navajo Nation.

“It’s helping by providing information on how to make schools safer and encourage parents and peers to build healthy relationships with children and each other.”

Calamity said the research benefits Diné College in that “It’s a great opportunity for students to experience something different and apply what they have learned to real life situations and exercise critical thinking and listening skills.”

Kien, who possesses a doctorate in cognitive psychology from Northwestern University in Evanston, Ill., said the summer research project received $49,000 in DHS funds. The three students have expressed interest in going to graduate school upon completing their studies at Diné College.

The current research comes a year after Kien and two other psychology (B.A.) students spent more than two months at George Mason University in Fairfax, Va. to participate in a related DHS-funded program about research methods aimed at improving prevention techniques connected to school shootings and other forms of mass violence.