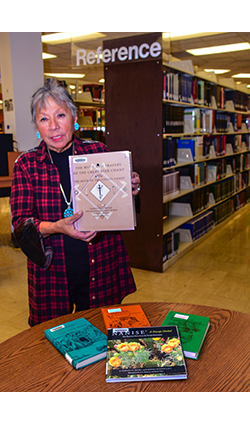 The Press went dormant in the late 1990s, but current Diné College President Monty Roessel confirmed that things should be back in the fore in a matter of time.

“We want to be a publishing house that prints books by Navajos for Navajos,” Roessel told the Navajo Times in a Nov. 15 article. “Things have changed a lot in publishing in the last decade,” Roessel said.

Anna Walters, a Shiprock-based Diné College instructor, last oversaw the Press, which was based at what was then the Navajo Community College in Tsaile. The College went through the name change in 1997.

During its decades of operation, the Diné College Press published some 40 books, mostly about Navajo history and culture. Those books are out of print now, but can be found at some used bookstores and on Amazon.com.

“I think it’s something that is a definite asset,” Walters said — herself an accomplished author who had multiple books come off the Diné College Press. “It was popular and well-used and I think it can be equally popular once it gets going again.”

The publishing apparatus had six full-time employees and some of the books sold very well. Among the more popular books were ones about the Navajo Long Walk and stock reduction, written by Ruth Roessel, mother of the current president. Other popular books included A Political History of the Navajo Tribe by Robert Young and Navajo Tribal Government,” by David Wilkins, according to the Navajo Times article.

Roessel noted in the article that a big difference these days in the publishing business is first runs of 5,000 aren’t really required to make a profit. Also, to keep costs low, Roessel referenced in the Times’ article, tasks such as editing and design wouldn’t have to be farmed out, rather done using existing Diné College staff.

The plan is to start small with at least the publishing of one book next year, perhaps something about the Treaty of 1968 and its impact on future Navajo generations, Roessel referenced.