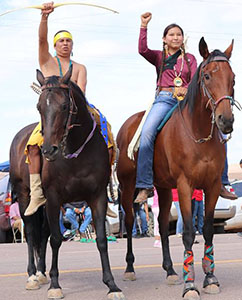 TSAILE, Ariz. — The Diné College Warrior mascot is coming live as a part of the College’s 50th anniversary. The mascot was first featured in the Central Navajo Agency Fair Parade and was a hit with onlookers.

Over the past few weeks, Diné College’s Marketing and Communications Department came up with the idea of bringing the school’s sports mascot, the Warrior, to the public.

The mascot serves as the school mascot for the sports programs. It is an image of a Warrior, with a yellow headband carrying a bow and arrow.

The mascot had a trial run at the recent Central Navajo Nation Fair Parade held in Chinle.

“The public really responded positively to the mascot,” Gwen Sam, a recruiter for the marketing department at Diné College, said. Sam worked closely with Sheldon Begay, a Diné College alumnus and the person Sam recruited to represent the school as the mascot. “We spent a lot of time discussing logistics and the mascot. There were certain expectations and standards that we wanted,” Sam said. “Next, we decided to add a horse. (Sheldon) is also very engaging with the crowd. The crowd at the Chinle Fair really enjoyed him.”

Diné College’s 50th anniversary has featured a Speaker Series and hosted the last of the Navajo Nation presidential forums at Tsaile. A gala will take place Sept. 22 in Scottsdale, Ariz., and a film documentary and blanket sale are on pace, also.

Diné College was started as a small edifice in Many Farms, Ariz. There are now six campuses in Tsaile, Chinle, Shiprock, Window Rock, Crownpoint and Tuba City.