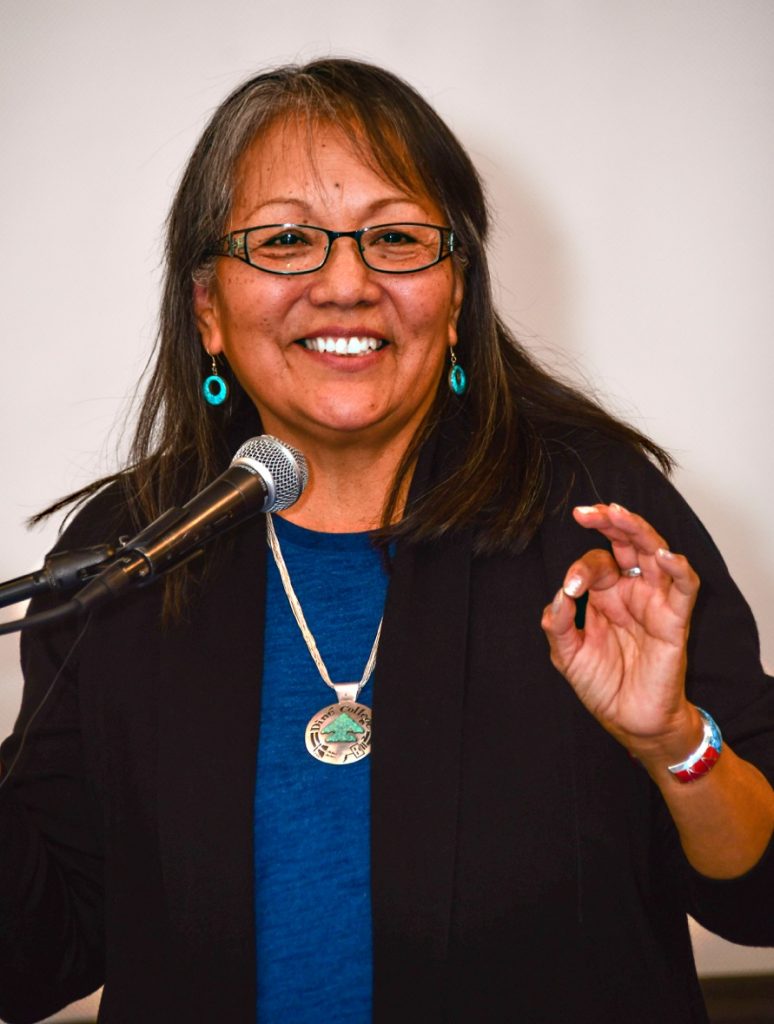 Others might want to learn from their lessons, Cassandra Manuelito-Kerkvliet, Ph.D., told about a dozen or so audience members Nov. 29 at Diné College’s final leg of the 2018 50th anniversary Speaker Series.

The two-hour talk, held at the Student Union Building, was titled “My Climb to the Highest Rung,” and covered the history-making career of Manuelito Kerkvliet — the first female president of Diné College and the first Native American female to head a university outside of the tribal college system, that being Antioch University in Seattle.

“All of (those) ancestors sacrificed for me to be here,” Manuelito-Kerkvliet said, referencing family members. “The things in my life come from my parents and grandparents.”

The great-great granddaughter of Navajo Chief Manuelito, Manuelito-Kerkvliet’s term (2000-2003) as president at Diné College was cut short only because she chose to go back to the University of Oregon to complete a doctoral degree.

The Laramie, Wyo., native was chosen as president of the Santa Fe-based Institute of American Indian Arts in 2006, but declined the offer.

“She’s one of the most authentic persons that I know,” Miranda Haskie, the Diné College sociology professor who put the Speaker Series together, said. “We are all thankful for her presentation.”

Chief Manuelito was a respected war chief during the decades-long struggles against Mexican and later U.S. forces. He was a signee of the Treaty of 1868, which ended forced government imprisonment of the Navajo. Chief Manuelito espoused a philosophy of “climbing the ladder of education” and Manuelito-Kerkvliet peppered her speech with like references. The Navajo Nation sponsors a college scholarship in Chief Manuelito’s name.

Manuelito-Kerkvliet, whose roots are in the Tohatchi and Naschitti areas of New Mexico, said she she’ll continue to be an advocate for the next generation of leaders and continue to stress the importance of education for Native Americans. She called education a “modern day weapon” for Navajos during the talk.

“She’s a very accomplished person and a role model,” Henry Yazzie of Lukachukai, Ariz., said. “I like that she’s very knowledgeable about history and education. That’s important.”

Founded in 1968, Diné College is the first tribally-controlled institution of higher education in the U.S. The college operates campuses in Tsaile, Window Rock, Chinle and Tuba City in Arizona and Crownpoint and Shiprock in New Mexico.