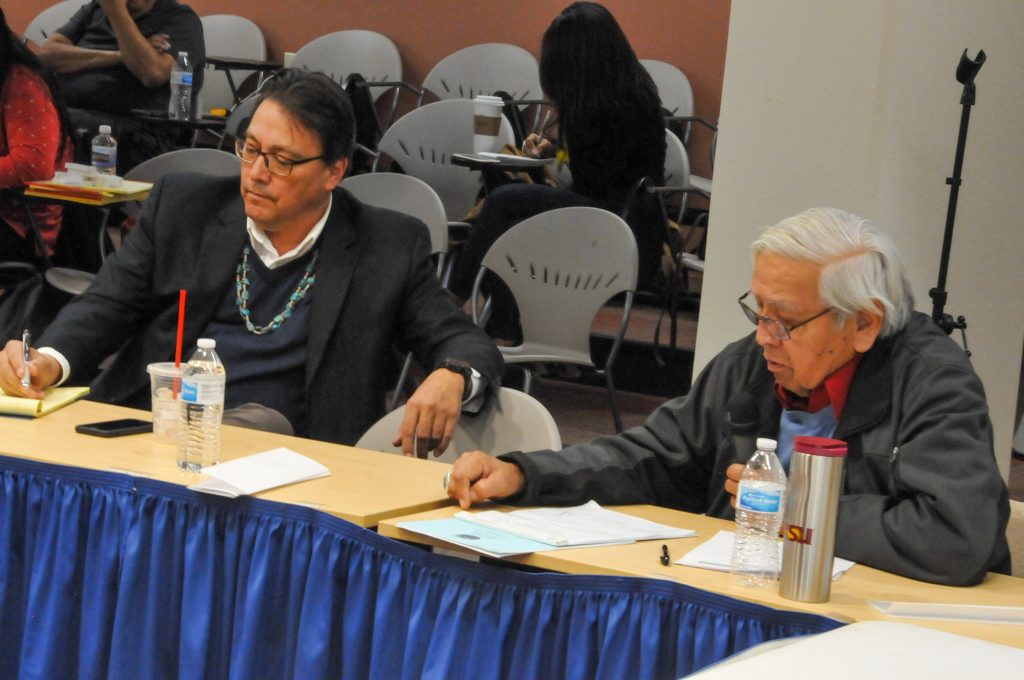 TSAILE, Ariz. —Several legal scholars from prominent law institutions across the country met last week at Diné College to lay out plans for a law school.

Since the college was established, officials have long sought a law school. Diné College, named a four-year institution in April, started looking into the possibility in the late 1960s.

But not until now have discussions about creating a law school formally gathered speed. The Law School Convening Diné College, a two-day symposium, was recently held at the college to go over everything from the college’s original mission, law school accreditation, core student courses and specializations, judicial advocates, law school naming suggestions and traditional Navajo law.

The symposium was organized by Diné College’s Navajo Sovereignty Institute Director Rex Lee Jim. Jim is a graduate of Princeton University and a former vice president of the Navajo Nation and will help organize a law school advisory committee going forward.

“When the college was being built, they talked about starting a law school,” Diné College President Charles Monty Roessel said. “We should have a law school. I think the Navajo Nation should have a role in this.”

Roessel touched on the possibility of working together with Navajo Technical University (NTU) to start the school. Both NTU and Diné College are the sole tribal college’s in the Four Corners.

Jim said the college is ready to begin the process of what it takes to start a law school in Tsaile. Ideally, Jim said one of the things the law school would specialize in is emerging areas of Indian law that are significant to the Navajo Nation economy.

Also at the meeting were Lindsay Robertson, faculty director at the Center for the Study of American Indian Law and Policy at the University of Oklahoma and Robert Coulter, the executive director of the Indian Law Resource Center in Helena Mont., and former Navajo Nation Chairman Peterson Zah.

“This is something that was talked about when I was chairman,” Zah said. Zah, a consultant to companies interested in doing business on the Navajo Nation and the former director of the Navajo Nation’s People’s Legal Services (DNA), offered to formally take the matter before the Navajo Nation Tribal Council.

Zah said a law school on Navajo would reap dividends for the judicial system. Under Zah’s DNA tenure, several legal cases related to Indian Country reached the U.S. Supreme Court. “This is something we need for the betterment of the Navajo people. We need to grow. We have the people to teach the uniqueness of Navajo law.”

Leeds volunteered to serve on the advisory committee and offered to bring back financing information to the next organizational meeting. Zah vowed to consult with the proper people at the Navajo Nation political level.

Leeds volunteered for the advisory committee and offered to bring back financing information to the next meeting. Zah vowed to follow the law school matter and to consult with the proper people at the Navajo Nation political level. Coulter said he’d provide insight as the idea gathers steam.

Diné College began in 1968 as the first tribally-controlled institution of higher learning in the U.S. Besides Tsaile, the college operates six campuses throughout northeastern Arizona and northwestern New Mexico.

Natasha Goldtooth, a Diné College environmental science student from White Cone, Ariz., said the symposium was informative. “Law School is something I’m thinking about. If a law school was here, I would apply.”