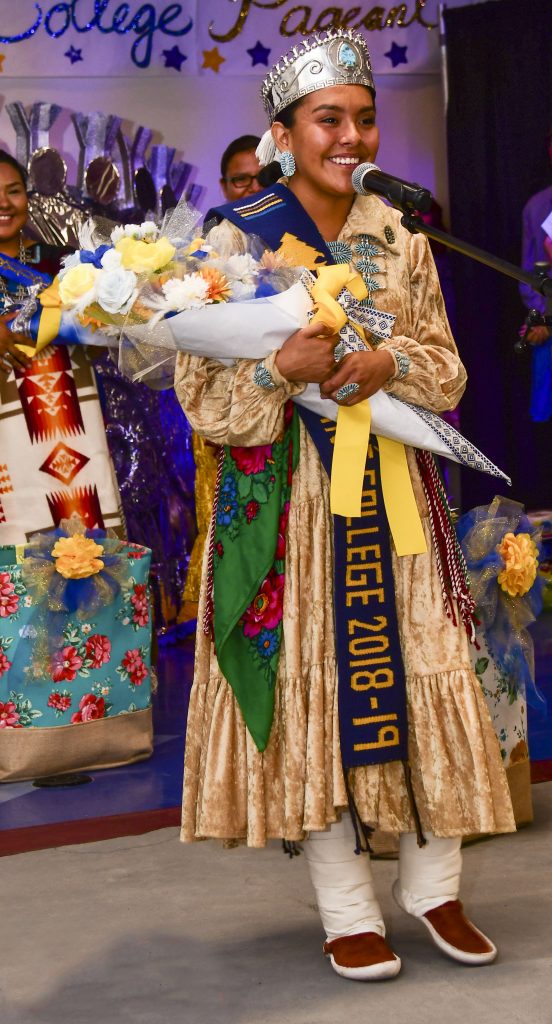 Mariah Lee: ‘I will represent the students at each of Diné College’s campuses with a positive attitude.’

TSAILE, Ariz. — A big smile emerges from Mariah Lee’s face as she talks about being named Miss Diné College.

“I got really emotional and I was very happy,” Lee, 19, said upon being crowned at the hours-long Oct. 3 pageant at the Student Union Building. “All of my family was there. A lot of my friends were there. It was a very special occasion.”

The Miss Diné College Pageant has been going on since 1970. The College was established in 1968 in Many Farms and is the first tribally-controlled institution of higher learning in the United States.

Among the requirements to be crowned are full or part-time enrollment, a grade point average of at least a 2.5 and an understanding of Navajo culture, history and traditional values.

Lee, who is fluent in Navajo and a graduate of Many Farms High School, played a Native American flute as part of the pageant’s traditional talent requirement. The 2018 pageant contestants included Shayne Jumbo and Lesley Gravatt (runner up) of Window Rock, Ariz., and Keandra Sam of Rock Point, Ariz. Lee’s reign spans one year.

“The selected candidate for Miss Diné College must attend cultural and community events throughout her reign and must represent Diné College,” Deanna Wauneka, the college’s Learning Center Director and a member of the Miss Diné College Planning Committee, said.

Wauneka said the contestants were judged on oral communication skills, analytic ability, cultural awareness and self-identity. During an interview portion of the pageant, she noted that questions were asked about fields of study, challenges that young people face and advocate.

It was the first pageant for Lee since Middle School. She said she chose Diné College because it’s close to home, affordable and “I get to be around my own people on a daily basis.”