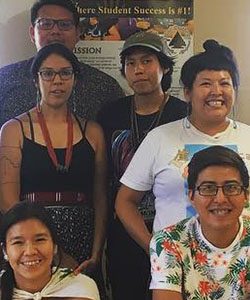 WINDOW ROCK, Ariz. — It certainly made for interesting headlines. The My Name Is Beauty: A Body Empowerment Summit and Official Sixth Annual Rez Condom Tour Launch — a daylong informational event that took place last month at the Window Rock Center of Diné College was a success, organizers said.

Not only did people have the chance to take in information on female empowerment, holistic health and domestic violence, but folks got the opportunity to learn even bigger things from Diné College administrators Matthew Skeets and Ken Nata’ani.

“I think the event went great,” Skeets said. “It was a great way to bring organizations together.”

The 50th Anniversary at Diné College

The College was started in 1968 as the first tribally-controlled institution of higher learning. Nata’ani is charged with getting the word out to alumni about 50th anniversary alumni activities and beefing up the alumni database.

Window Rock’s 50th anniversary celebration is Sept. 14. There are individual 50th celebrations at each of Diné College’s six campuses.

Nata’ani said he handed out written information and fielded questions on all sorts of things pertaining to Diné College.

“I was able to talk to people who were and were not connected to the College,” Nata’ani said. “It was a very good way to get information and recognition out about Diné College.”

The Rez Condom Tour is a grass roots organization that promotes healthy sexual expression for Navajo youth. The tour raises awareness about the importance of sexual education and increases access to contraceptives for Navajo youth.

Donovan Yazzie, 19, of Window Rock, said he was picking up a friend from a class. He said he thought there were a lot of interesting people at the event.