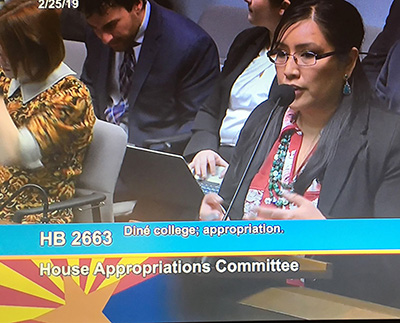 TSAILE, Ariz. — With remediation a top issue at Diné College, the Arizona legislature looks to be moving toward doing something to address the situation.

Senate Bill 1266, and House Bill 2663, heard last week before the Senate and House committees on appropriations, originally sought a $2 million amount for remediation in reading, writing and math at Diné College.

The mirror bill on the House side seeks the same amount in appropriations. Together, the two bills do not exceed $3 million. The college accepts many students who place into remedial courses and some have to take the courses multiple times.

Diné College officials noted that since 1972 the Navajo Nation has spent more than $22 million on remedial education. Eighty-eight percent of Diné College students come from Arizona high schools — and 90 percent of them enroll in remedial courses.

Diné College administrators have said in the past that the funds would go toward tutoring and working with high schools to identify academically a-risk students.

“Another good day for (AZ LD7),” Peshlakai commented, referencing her governing district. “Senate Bill 1266 moves forward out of the Senate to go through the same process in the (AZ) House in coming months. Thank you to staff for tireless work and members for your favorable votes. Let’s pray to keep this going for the Governor’s signature. Great and tireless work by Diné College President Monty Roessel, the Board of Regents and the Diné College staff.”

Peshlakai is Navajo and a graduate of Northern Arizona University and a U.S. Army veteran who served in the Persian Gulf War.

Diné College was created in 1968 as the first tribal college in the U.S. Today, the college offers 10 bachelor programs, 20 associates of arts and associate of science degrees and eight certificate programs across six sites in Arizona and New Mexico.