Home > About > Meet the Marketing Team 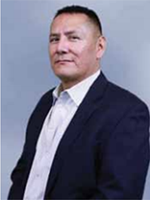 As the Director of Marketing and Communications since February 2018, George Joe oversees the College’s marketing, recruitment and communications operations. He has a bachelor’s and a master’s degree in English, plus a Master’s in Education (Leadership) — each from Northern Arizona University (Flagstaff, Ariz.). He is currently working on an M.B.A. Joe has spent more than 20 years in marketing, media, journalism, publishing and public relations. Additionally, he has served as a board member at Northland Pioneer College and Dilcon Community School Board President, and as a member of the Diné College English faculty.

Bernie Dotson moved to Gallup, N.M., in 2009 and worked for the Gallup Independent as a city hall and sports reporter and was a member of the Independent’s editorial board. Dotson has a master’s degree in International Relations from the University of Miami (Coral Gables, Fla.) and a bachelor’s degree in Humanities from Michigan State University (East Lansing, Mi.). Prior to the Independent, Dotson worked at newspapers on the East Coast.

Dotson writes news releases, copy edits, works with the communications team in content writing, assists with newsletters and serves as the official spokesperson for the College.

Scott Tom(Navajo) is originally from the Tsaile area and is a Chinle High School 2001 graduate. He brings more than 11 years of professional graphic design and social media experience to the job. He has been a graphic design teacher and has assisted many corporate clients across the Navajo Nation with design tasks. Tom creates and produces design concepts and products while maintaining the continuity of Diné College’s imagery and branding. Among other duties, Tom designs the school calendar, newsletters and other graphic documents.